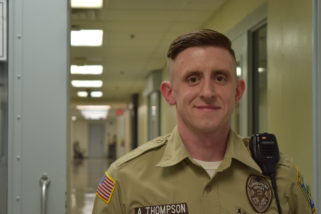 Entering the jail, one is greeted by a large reception desk manned by an officer wearing a tan uniform with a sewn-on Riley County Corrections badge. Around the corner is the break room, and down the hall a visitor may see lower-risk inmates doing chores. There is no sign of daylight at this point. Everything is made of safety glass, concrete and steel.

Checking his radio and chatting with an inmate folding laundry is Ace Thompson, a slim, athletically-built man who has a shy, yet welcoming presence in such a forbidding environment. He’s quiet, he seems very respectful and intuitive of his surroundings. He gave KMAN a tour of the jailhouse, showing us where the inmates of all security risk levels work, sleep and eat.

Thompson says he wasn’t always interested in working for law enforcement or criminal justice. Until his acceptance into the department, Thompson had been a soldier in the Kansas Army National Guard, and worked full-time in an auto shop. Thompson only decided to pursue law enforcement as a full-time career after a life changing event a few years ago. 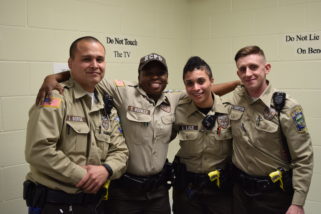 “It was a drill weekend,” Thompson said, describing how he and a group of his friends were out late at night celebrating a birthday in Junction City, “We were at Poncho’s with a few people. Down the street, we noticed a fight going on. The guy was screaming pretty loud, so we ran over there. I look down and I see the guy, he’s got a few stab wounds and he’s bleeding out. Luckily, the cops were around the corner so they took the (suspect) away while my friend and I performed combat lifesaver techniques on him. We ended up saving his life.”

Thompson described the normal climate working in the jail. In many cases, inmates lash out, or at least have no problem describing their distaste for corrections officers during their time in jail in not-so-friendly ways. Thompson appeared to accept the negative consequences of his job as just a daily occurrence. Instead of focusing on the emotional wear and tear of his duties, he focused on the positive role corrections officers can play in the lives of individuals living on the other side of the bars.

“I wouldn’t say it’s hard, but I’d definitely say it’s challenging, because you have to look at everything from (the inmate’s) point of view as well,” explained Thompson, “so you can’t just go in and say you’re in charge. Even though you are the one in charge, you have to see where they’re coming from. I mean, being in jail, everything they’ve known about life is ripped away. You have to be fair. You can’t just judge them, even though you know why they’re here.”

Thompson and other corrections officers agreed that they didn’t necessarily choose their job, rather, the job chose them. The demands of working in corrections appeared to compliment the physical and mental demands of being a soldier as well.

“You kinda have to be ready to adapt to anything,” said Thompson, “because anything can happen in the jail at any time. You have to be ready to respond to that. In terms of personal readiness, and within (my duties) in the Guard, I go to the gym every morning before work. On the mental side of things, I read books. You have to stay mentally and physically fit for anything.”

On the flip-side, Thompson did have advice for people of the Riley County community who may find themselves struggling with the law.

“I’ve seen what happens if you keep going down that road,” warned Thompson, “we do see a few repeat offenders in here. From the time they get out to the time they come back to jail, they look a lot worse.”

However, Thompson says that there’s usually always hope for the inmates he meets, mentioning a specific unnamed inmate who had been under the watchful eye of corrections officers like Thompson for the past several weeks.

“When he came in he was rude,” said Thompson, “but he’s settled down now. He came up to some of (the corrections officers) the other day and told us (he) didn’t want to be in prison anymore, and when he was done he wanted to talk to students. So that was very good to see.” 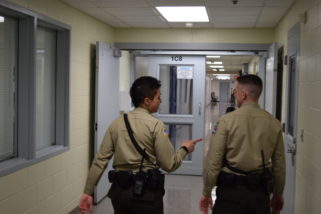 Ace Thompson’s story is the first part of the Riley County Justice mini-series. Hear from Thompson by clicking here: