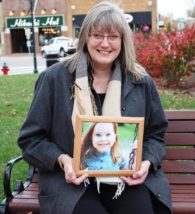 A mother and Kansas State University graduate, Julie Wethington, has always had a passion for children and her community. Nowadays she doesn’t have the need for a full-time job, and her children have grown up and left the house. When she spoke with KMAN, she had a quiet smile that brightened the room around her. With such a kind and glowing personality, it’s difficult to fathom that she’s often in a court room or visiting the homes of children, fighting for their rights as they face the horrors of child abuse and neglect.

Wethington is a volunteer with Sunflower CASA, or Court Appointed Special Advocates. This organization is known nationally, but around here, volunteers like Wethington collectively take on dozens, sometimes hundreds of cases involving the abuse and neglect of children in Riley, Clay and Pottawatomie counties. After years of deliberation, Wethington chose to begin volunteering in 2015, and received her first case in February of last year. She told KMAN that the work she does for the organization is both challenging and rewarding.

“It’s challenging because the children are hurting.” Wethington explained, “In my current case, one of the children is living in a foster home and going through that experience alongside her, being removed from the home where she was living, and then placed in a foster home, there’s just a lot of emotions and feelings that accompany that.”

Wethington says she had a similar childhood, living in the foster care system for a time while she was a teenager. She says the cases she takes on often involve a lot of emotional ties.

“When you have feelings about something, you can be either sympathetic or empathetic.” Wethington said, “Because of my own experience, as a child and temporarily being in foster care as a teenager, I have empathy for one particular child right now, who is in the foster care system, who I advocate for.”

Wethington told KMAN that the difference between volunteering for CASA and being a social worker is that there’s many occasions where a CASA is the only consistent adult figure in a child’s life during the court process. She says she’s built some bonds with some of the children she’s helped along the way, and has advice for anyone considering volunteering for a cause such as Sunflower CASA.

“It comes from the heart,” Wethington told KMAN, “the willingness and the want to do this. I think everybody has that within them… What makes a good volunteer is just jumping in and doing it. Whether it’s helping a neighbor who can’t mow their lawn anymore… When you see an opportunity just jump in and do it. That’s what makes a good volunteer. And as far as just staying the course, as a CASA, nobody knows what’s around the corner.”

Sunflower CASA says the goal of their organization is “based on the principle that each child deserves a safe, permanent, nurturing home where they can thrive” (sunflowercasa.org). They say that since the start of their organization 40 years ago, nationwide they’ve advocated for over a million children. Wethington has been recognized by the leadership of Sunflower CASA as an outstanding and valuable member of the organization, and she had some wise departing words for KMAN:

“You just have to do what you love.” said Wethington, “Right now, this is something I love doing, and it is rewarding in a lot of aspects personally. I feel like I’m giving back to a system that I was part of for a very short time in my childhood. I’m hopeful that the time that I give to this, the people that I effect along the way and share time with along the way, that they’ll remember it and they’ll pay it forward in their lifetime.”

Julie Wethington’s story is the second part of the Riley County Justice mini-series. Hear from Wethington by clicking here: