You are at:Home»Local News»Roberts, Moran and Marshall voice concerns over Trump bailout plan 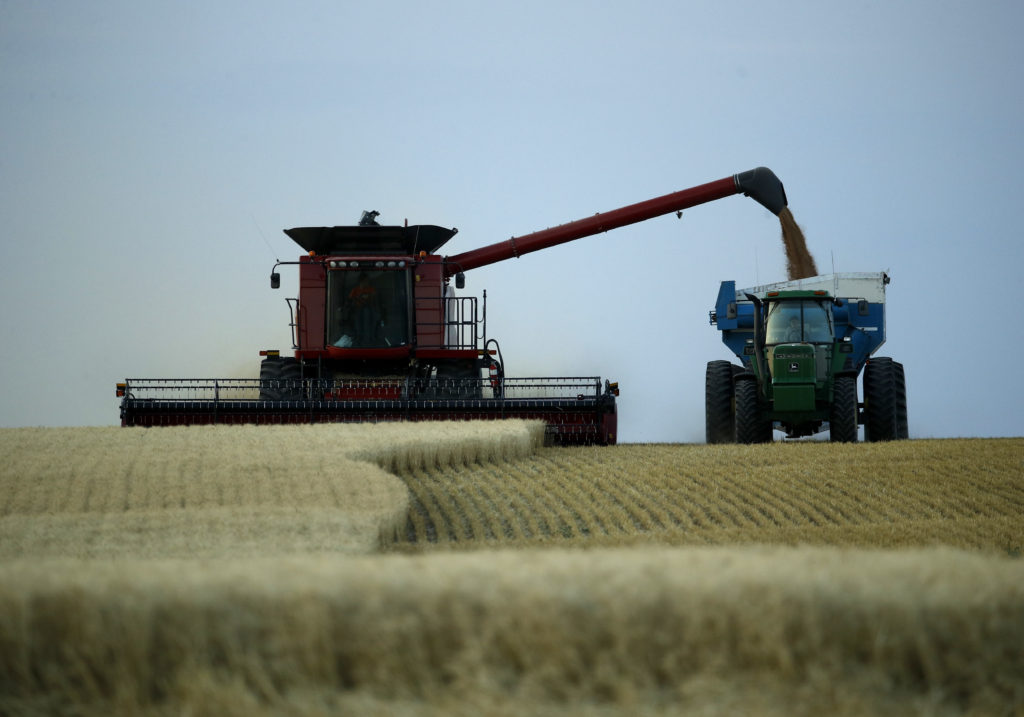 In this Friday, June 15, 2018 photo, winter wheat is harvested in a field farmed by Dalton and Carson North near McCracken, Kan. Kansas farmers are harvesting a smaller winter wheat crop amid an ongoing drought. (AP Photo/Charlie Riedel)

Kansas politicians welcome the federal government’s peace offering to farmers hurt by tariffs and trade war threats enacted by the Trump administration — but are skeptical of what it means for agriculture in the long term.

U.S. Senator Pat Roberts released a series of statements after the U.S. Department of Agriculture announced Tuesday up to $12 billion in assistance to farmers impacted by tariffs.

Roberts, a Kansas Republican and the Chairman of the Senate Committee on Agriculture, Nutrition and Foresty, said in a press release from his office Tuesday that, “Given the low prices farmers have been facing, the tariff situation is making things worse for producers.”

He added, “Trade remains the single best solution to the tough economy in farm country” and that he will look closely at the president’s assistance proposal, but hopes the administration is also working to “quickly resolve the tariff situation and restore the export markets farmers, ranchers, and growers rely on.”

Roberts also put emphasis on the need to finalize and pass a Farm Bill.

He said the administration’s announcement “underscores the tough times producers face in agriculture with low prices, surpluses, and uncertain trade circumstances and that it is all the more reason to put politics aside and provide farmers and ranchers with a Farm Bill to give them certainty and predictability.”

“Prices are not good — they haven’t been good for several years,” he said. “It looked like we were making a little recovery there. Soybeans prices actually looked pretty good, what, a couple months ago? And then, of course, politics has gotten in the way of that a little bit.”

McClure said it’s hard to ignore the repercussions of tariffs.

“That’s when prices started going back down again,” he said. “So yeah, I think everybody would agree that’s kind of what’s happened.”

“When we don’t sell soybeans to China, then that means that Argentina and Brazil are,” Moran told the paper. “If there’s an agreement on reducing the tariffs and the Chinese tariff against soybeans from the United States goes away, then what’s going to happen when China is already buying from Argentina and Brazil? How do we get that market back?”