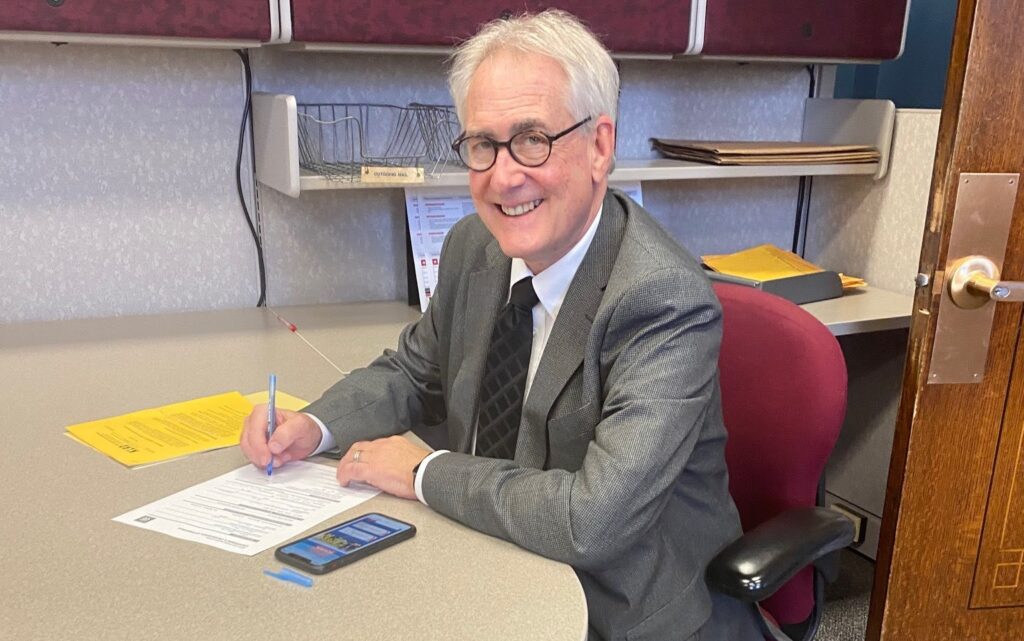 Hawk is running for re-election in District 22 of the Kansas Legislature. The spotlight this election season continues to be on COVID-19 and the economic impact caused as a result. Hawk says while the economy is important, the health and safety of every citizen is equally as important.

“I was appointed by the governor to be on her SPARK committee. I think there are just a lot of critical parts to that. One of the key parts is keeping as many of our businesses viable as possible and I think we’ve been able to do that, not only with the CARES money, but the federal government has sent out about $6 billion that has gone to businesses,” he said.

One of the important aspects Hawk says he has seen during the pandemic is keeping the nursing homes open. Since this is where most of the deaths in the state are occurring, Hawk says it was important to get personal protective equipment and testing kits to employees and residents.

“Also got very concerned about higher education. We had some money that came in and another piece of that is we sent $400 million out directly to the counties and I still believe government is best closest to the people so our counties can make some of those decisions, shore up their health departments,” he said.

Hawk says the next area he wants to focus on is testing, since getting results from labs in a timely manner has been an issue. He would like to give testing kits to businesses to help keep them open.

On some of the key issues:

Education: Hawk says he would like to see education funding remain a priority even through the pandemic. This also includes higher education, especially for K-State.

“I think we made a big mistake in the 2008 recession with the Brownback tax experiment where it pushed our state economy as well as our state budget into the hole. It was a disaster. I think we have to be careful not to make the same mistake because we don’t know what the overall impact is going to be on the state budget,” he said.

Hawk says predictions for state revenue loss show a decrease in over 1 billion dollars. Around 700 million dollars in allotments were made by the governor, but Hawk says they are not seeing that yet. However, revenues have been higher than predicted because of the internet sales tax.

“We do a special consensus revenue estimation in November and I think we’ll all have a better idea of what we’re looking at. When the legislature comes into session in January, that’s certainly going to be one of my priorities,” he said.

Hawk adds he believes it is the will of the legislature to protect public education if at all possible.

Medicaid expansion: The hot topic will certainly be a major discussion point for lawmakers in 2021. Hawk says expansion is a must in order to keep rural hospitals solvent. He says the state has unfortunately already seen a few forced to shut down.

“That’s part of the mix. Hospitals are required to provide service to people that come through the emergency room, so they can only provide so much charitable care. Getting 100,000 Kansans covered in a pandemic (is crucial), we’ve had more people unemployed, some people may be losing their health insurance,” he said.

The Kansas Hospital Association came up with a plan that states medicaid expansion will actually help the state economy and be revenue neutral. Hawk says he tends to trust their figures at this point, but will need to take another look due to the pandemic.

“We certainly need to be able to take care of people’s health. As people get sick and particularly if they get sick with COVID, and rack up some bills, we need to not put people into bankruptcy because of that. We need to make sure we’re containing the virus by providing the care so that they’re not spreaders,” he said.

Hawk is challenged in the District 22 race by Craig Bowser (R-Manhattan). Hawk has elected to the State Senate in 2012 and re-elected in 2016.

His full interview with KMAN is below.