You are at:Home»Local News»Seven finalists announced in Manhattan flag contest

After reviewing more than 100 submissions, the Manhattan Arts and Humanities Advisory Board have settled on seven finalists in the City of Manhattan flag contest.

Submissions opened in March 29 and now the choice of Manhattan’s new city flag goes to the public for a vote. Voting opens on Monday, July 1 and closes Sunday, July 14 at 5 p.m. The designer of the winning flag will receive one of the first of the new flags and recognition from Mayor Mike Dodson. Finalist designs were submitted by Kim Medvid, Jordan Peters, Ben Chmiel, Sharon Snyder, Jackson Andre, and Troy Henningson.

Votes can be cast online — which will be limited to one per IP address — or in person at the customer service window at City Hall.

According to a release from the city, “The concepts were inspired by the natural beauty of the Flint Hills, Manhattan’s location at the confluence of the Big Blue and Kansas Rivers, the Kansas State Motto ‘ad astra per aspera,’ as well as the prosperity and unique heritage of the city. Each flag also has a distinctive and meaningful symbolism.

Below are the submissions and descriptions of what they symbolize written by the designers. 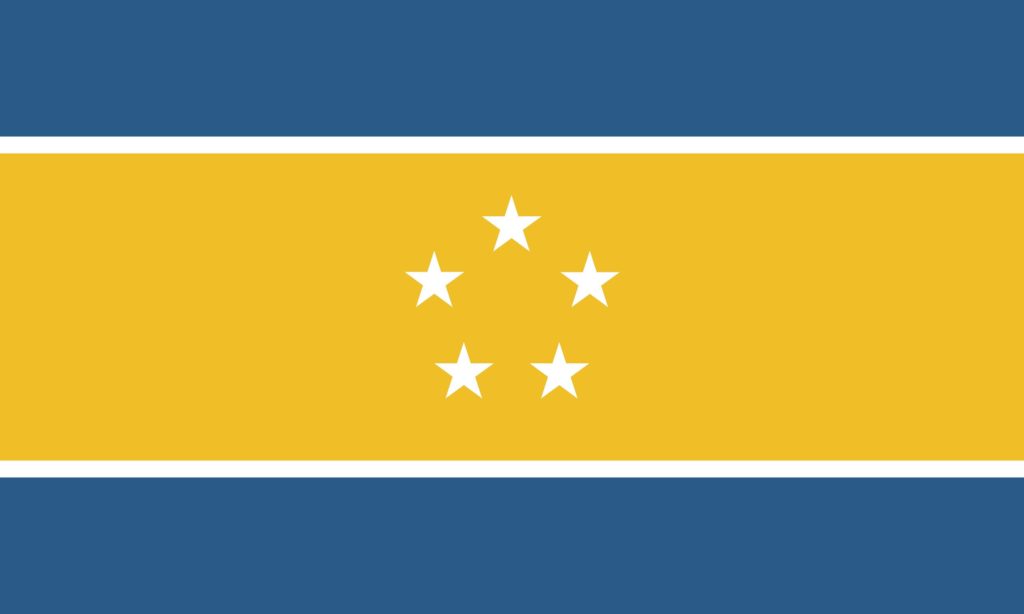 A – Ring of Stars:
The two blue stripes represent the Big Blue and Kansas Rivers, which border Manhattan and provide one of the most important natural resources for any community.
The stars represent the Kansas State motto Ad Astra per Aspera (to the stars, through difficulties).
The number of stars represents the five City Commissioners who govern the City, the five officials in the 1855 Constitution of the Manhattan Town Association, as well as the founding members of Bluemont Central College in 1859, which became Kansas State University. 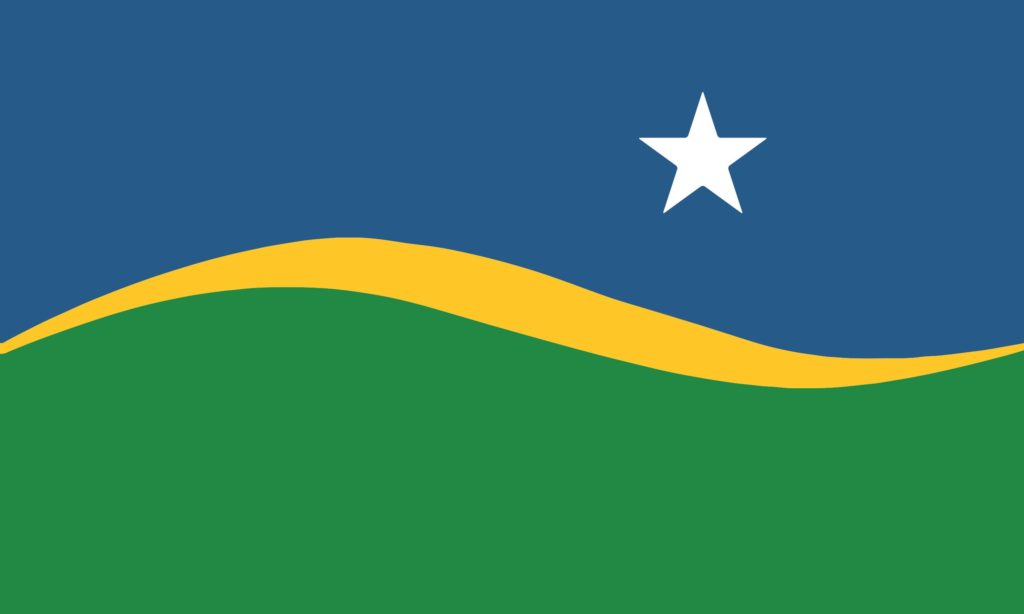 B – Shining Star of the Prairie
The wave going through the center represents the Flint Hills. Its green interior is symbolic of fertility and growth. Its gold edge symbolizes the native grasses and sunflowers that Kansas is known for, as well as prosperity and agriculture.
The blue half of the design represents the blue skies of Kansas.
The star ties in with the state motto, and reflects the position of Manhattan in the state of Kansas. 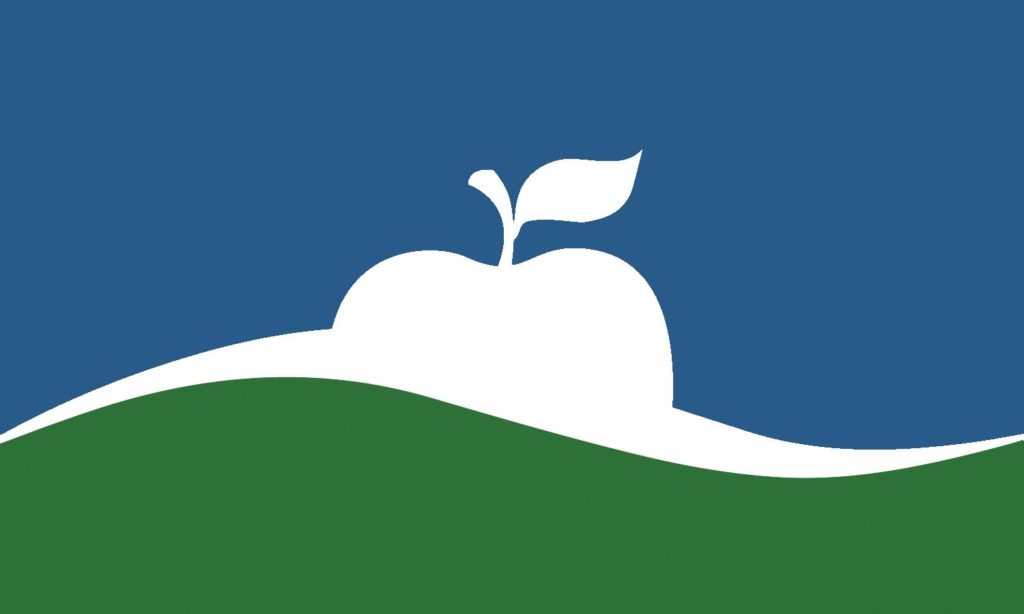 C – Little Apple on the Prairie
The apple rising out of the hillside symbolizes the city’s growth as a land of opportunity, and recognizing Manhattan’s nickname as “The Little Apple.”
The shape of the hillside is a reference to the gently rolling Flint Hills, and the green color represents the wealth of natural resources in the area. 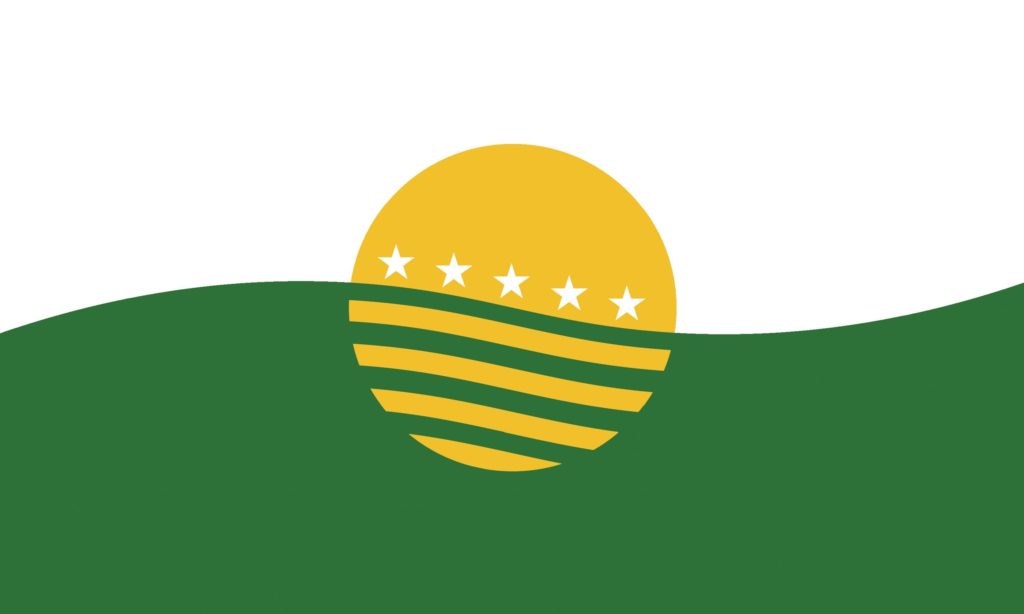 D – Rolling Hills
The green represents fertility, growth, opportunity, and the distinctive native grasses of the area.
The gold sun represents the gorgeous sunsets in the region, as well as the wealth of resources, and bright future of the community.
The five stars in an arch over the upper half of the “coin” tie in with the state motto (ad astra per aspera) and represent the five City Commissioners, as well as the five officials in the original Constitution of the Manhattan Town Association, and the founding members of Bluemont Central College. 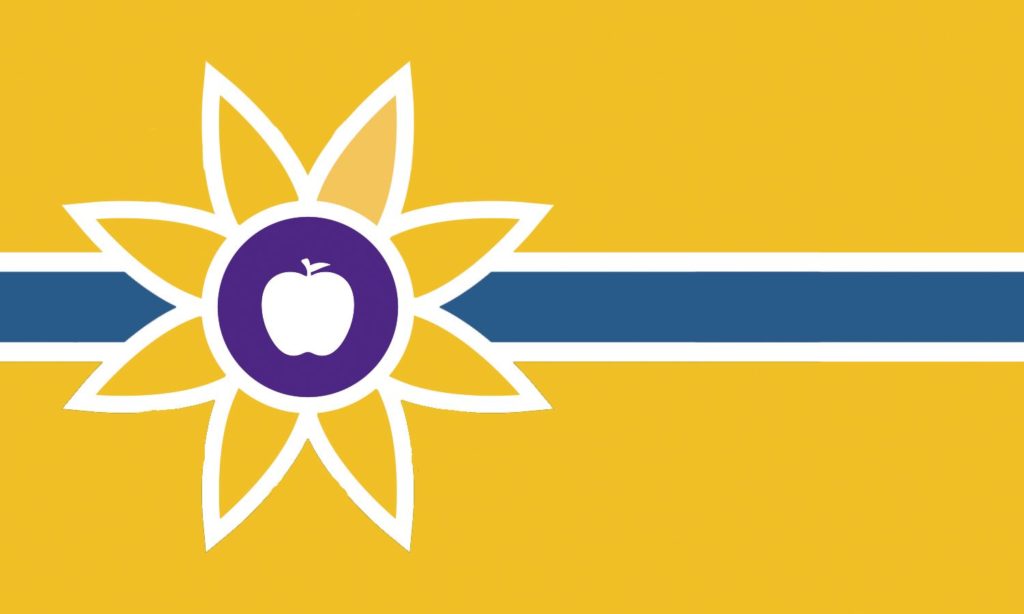 E – Sunflower
This flag is meant to unite the unique elements of the City of Manhattan, while also tying in to K-State.
The gold represents the Konza Prairie, as well as the positive energy and optimism of Manhattan residents.
The sunflower represents Kansas as the Sunflower State. Its purple center honors K-State, representing the wisdom and pride of Manhattan, and the apple in the center is a nod to Manhattan’s nickname “The Little Apple.”
The blue stripes represent the Big Blue and Kansas Rivers, which border Manhattan. 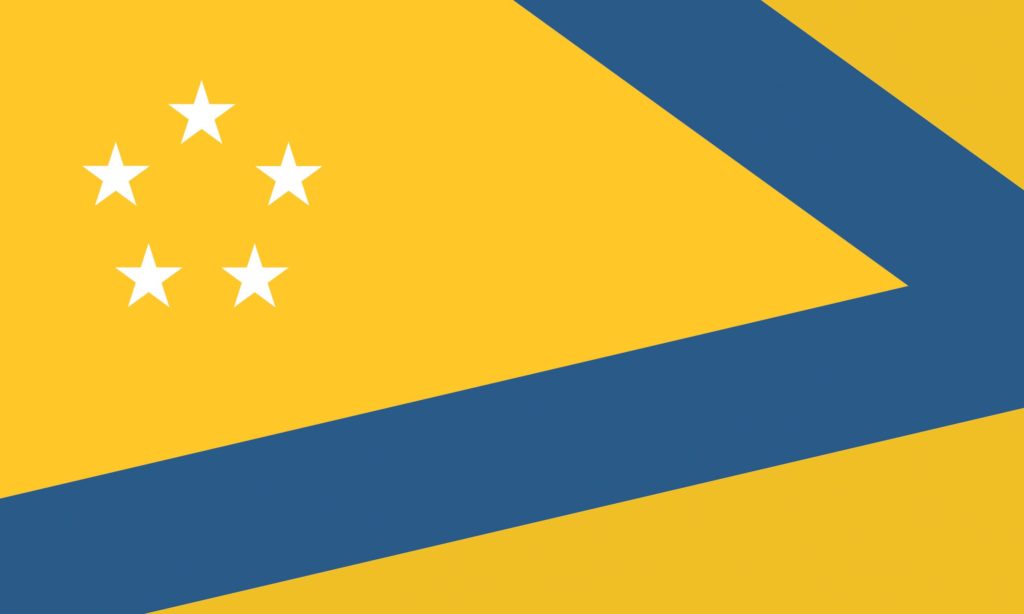 F – Confluence
The triangular formation of the blue and the gold symbolizes the city and the nearby confluence of the Kansas and Big Blue rivers. Their colors, as mentioned on other designs, represent native grasses, sunshine, agriculture, prosperity, friendliness, and peace.
The stars represent the Kansas State motto Ad Astra per Aspera (to the stars, through difficulties).
The number of stars represents the five City Commissioners who govern the City, the five officials in the 1855 Constitution of the Manhattan Town Association, as well as the founding members of Bluemont Central College in 1859. 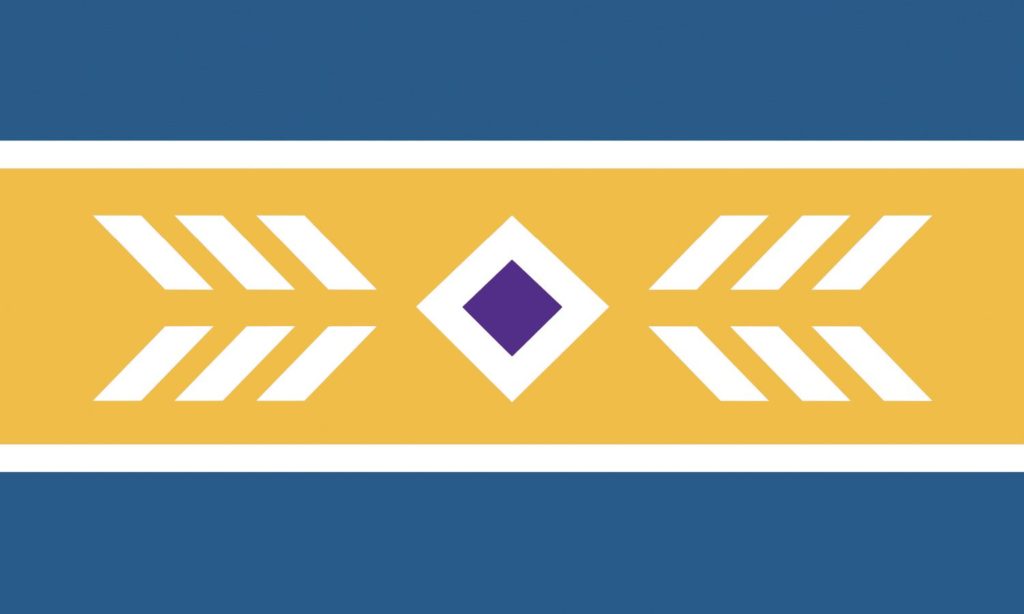 G – Heritage
The chevrons represent U.S. Army enlisted rank insignias, a head prairie grass, as well as the shaft of an arrow. The left Chevrons represent Fort Riley, west of town, and our culture shaped by the Fort. The Right chevrons represent Manhattan’s agricultural roots as well as the Native Heritage of the Kaw Nation.
The white diamond represents the City of Manhattan, its civic pride and the pursuit of progress. The purple diamond nested in the white diamond represents K-State University, the figurative and geographical heart of Manhattan as a college town.
Blue stripes at the top and bottom signify the Big Blue and Kansas Rivers that border Manhattan.