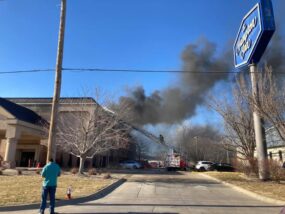 Manhattan Fire Department responded to a structure fire at the Hampton Inn on Wednesday. 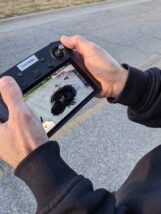 MFD crews immediately searched the building and evacuated one person from the building. A collapse occurred on the roof and a hotel room on the third floor crashed down to the ground level. The room collapse was due to water.

Firefighters were able to contain the fire in just over two hours after reaching a second alarm. A total of 40 firefighters responded with eight fire apparatus. Units were still on scene hours after the fire was contained. No injuries were reported to civilians or firefighters.

MFD Deputy Fire Chief Ryan Almes says the fire started accidentally by a construction crew cutting on the roof.  Drone footage shows a large hole on the roof, as well as damage to the siding.  Thermal imaging showed some areas with high heat hours after the fire was contained. 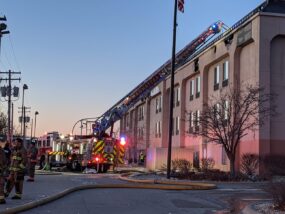 An estimate of the fire loss to the building is not available at this time, however MFD reports the building sustained significant damage.