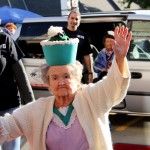 The Wizard of Oz museum in Wamego is getting to be pretty well known for it’s annual Oztoberfest event. Vistitors from all over flock to the museum to experiance the magic that is Oz, decades after the release of the move. Margaret Pelligrini, one of the original Munchkins in the 1939 MGM motion picture “The Wizard of Oz,” will be the featured guest

“Margaret has been with us nearly every year of our festival,” states Oz museum manager Salina Morgan. “She will have celebrated her 89th birthday just a few days before our festival, but she is determined to come and be a part of our celebration.”

Margaret is one of three surviving munchkins. She will be the only one attending since the other two have health concerns that prevent them from making the trip.

Miss Pelligrini had two different parts in the classic film.  She was one of the Sleepy Heads who occupied the bird’s nest, and also one of the Flower Pot girls.  Appearing in the front row with the “flower-pot” hat, she has been identified with that role ever since.