Planes and cars that fly and drive themselves? Medical robots care for their patients sans the doctor? Those “wild” ideas aren’t as futuristic as they sound. 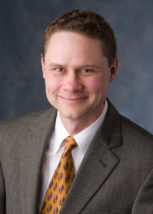 That’s according to CEO of Northrop Grumman, Wes Bush who stated during last night’s Landon Lecture Series that advancements in autonomous technology with cognitive abilities is both important and controversial.

“Currently, the only real players in these efforts to socialize machines that can learn are technologists on one end and popular culture at the other end,” said Bush. “And the mass media’s vision of this technology is almost universally dark. Anyone who’s ever watched a ‘Terminator’ movie knows what I’m talking about.”

Bush urged Kansas State University and other institutions of higher learning to bridge the gap.

“When universities do it right, the fears and reservations associated with new technology are often calmed and their potential gets socialized and made more welcomed in our lives.”

When new technology is not properly socialized, Bush argued that the potential for improvement is lessened.

“I think the unused potential today of genetically modified foods is a really good example of that.”

Northrop Grumman develops autonomous systems for cyber, command and control applications for both the government and commercial customers.