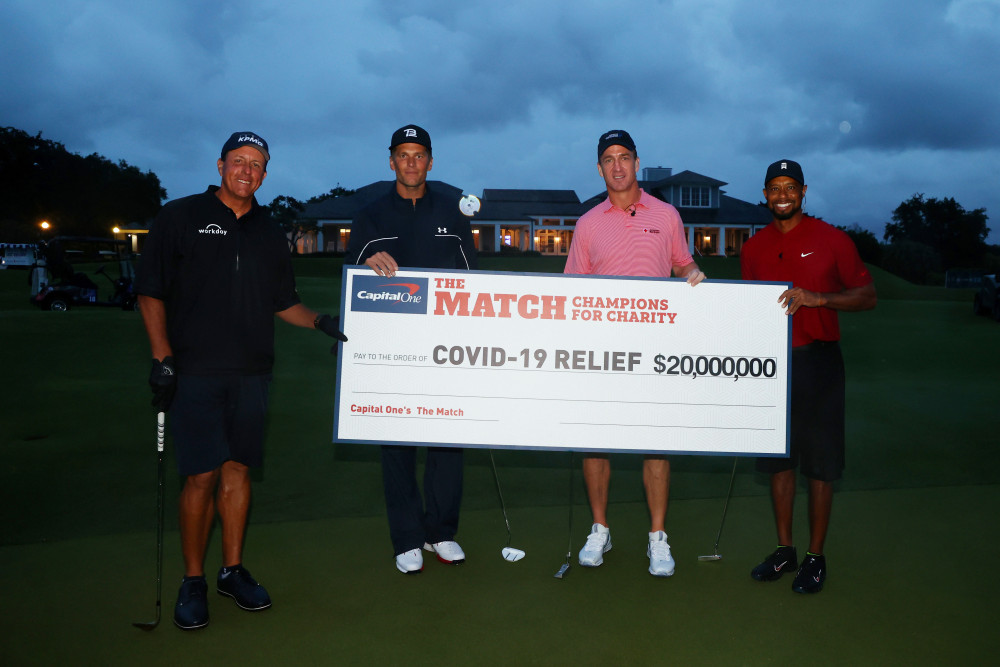 PGA Tour legends Tiger Woods and Phil Mickelson hit the course for the second edition of “The Match” on Sunday. This time joined by teammates in the match play event, Woods with 2x Super Bowl Champion and 5x MVP Peyton Manning. Mickelson with 6x Super Bowl Champ and 3x MVP, as well as fresh Tampa Bay Buccaneer Tom Brady. From Medalist Golf Club in south Florida, the Capital One sponsored event saw various donations throughout the day for different charities that the players were helping out. In addition to winning for their charity, an auction was happening during the entire round.

The front nine was a best ball format, which helped Woods and Manning develop a commanding lead heading into the alternate shot formatted back nine. After two holes the match was all square, then Woods and Manning won holes three and four. Including Manning delivering a 20 foot birdie putt on the Par 3 4th. Woods was dialed in all day long, as he didn’t miss a single fairway throughout the course of the match and had made birdie to win the 3rd hole.

Tom Brady proved he was a human in every aspect outside of the football field with his play throughout the day. Brady’s shots went everywhere but the ideal location early in the match. Charles Barkley offered $50,000 of his own money if Brady hit the green on the Par 3 4th. Brady came nowhere close. After that event, Brooks Koepka joined in on the fun and offered $100,000 to his charity if Brady could just make par on any hole on the front nine.

That looked like a safe bet until the shot of the day was hit on hole 7 by Brady. Knocking the ball around three times before preparing for his fourth shot on the Par 5 7th, Brady stepped up and rifled a shot that spun back and fell into the hole for a birdie. Woods and Manning still had a chance to win the hole, but Tiger’s eagle putt lipped out and they settled for the tie on that hole.

Tom Brady’s heroics weren’t done on the day though, on hole 11, into the alternate shot, Phil Mickelson hit a bomb over the trees and drove the green on the Par 4. From the back of the green Brady drilled an eagle putt to get a hole back for Mickelson and Brady.

On hole 16 Seattle Seahawks QB Russell Wilson vowed to donate 100,000 meals per each shot that landed within 12 feet of the hole, 3/4 players did so. The only one to not do so was Tiger Woods, but his partner Manning was the closest out of anybody.

Some drama went into the final hole with Woods and Manning 1 up, but they were able to win the final hole easily and finish off the match. Raising $20 million for different charities.

According to Turner, the average viewership was 5.8 million for The Match. Making it the most-watched cable golf event.