Manhattan-Ogden USD 383 board of education continued to hear from concerned parents on the current model of learning.

Parents, as well as a student and staff member, voiced their concerns over the quality of education being given in the hybrid model.  Manhattan High School Sophomore Wesley Zika says she is a straight A student and has never had difficulty with school, but the hybrid model has changed that.

“Hybrid is not working for me. I began having multiple breakdowns every night and decided to talk to my mom about how much I am truly struggling socially, mentally, and emotionally,” says Wesley.

Special Education Teacher Ashley Eckelberry has been teaching in the district for 13 years and is the current Elementary Teacher of the Year.  Eckelberry has also been working as a remote teacher during the hybrid model.  She says teaching remotely has been hard, and the students have been struggling as well.

Another member of the public, Mellissa Rundus, went against the majority of comments by wanting to stay in the hybrid model.  She says the model may not be ideal, but it is the best the district has to protect students and staff.

“I guess I would ask you to just work on the hybrid more and look at other places where the model is successful.  Talk to parents and teachers about what’s working and give it a chance a little bit longer before we scrap it and end up in all virtual again,” says Rundus.

Later on in the meeting, the board of education was presented the results of a recent survey about the hybrid modeling of learning.  The survey was generated after the Sep 16 meeting and was sent out to both parents and staff.  Over two thousand surveys came back from parents and 670 from staff.

Highlights from the parents side of the survey showed a response of 3.43 out of 5 for the comfort level of continuing the hybrid model.  Comfort level with changing one of the options, came back as a 1.76 out of 5.

For the option of secondary students moving to a non-block schedule, results showed a response of 3.38 out of 5. The result for how comfortable they felt supporting their students on remote learning days was a 2.45 out of 5.

On the staff side, Assistant Superintendent Eric Reid says there were some notable differences of opinion.  Continuing the current model was a little higher 3.76 out of 5, but returning to five day schedule with the positivity rate under 10% was higher than the parental response.

Executive Director Paula Hough says when presenting the optional methods, the results were mixed. She says it made staff feel more comfortable with hybrid due to its current consistency.
“We thought there would be a no brainer with shifting those days with the A and B groups, increasing the number of days between when students saw staff.  But neither group was a fan of that option,” says Hough.
Another option is to modify secondary grade schedules from block to seven or eight period days.  However, Hough says there are too many contradicting factors with safety to use this option.  The next option would be to phase in reopening starting at with lower grade levels, similar to other districts.
“I get it, we want to watch what other districts are doing and learn from them, but everything is unique to each district.  We’ve had a lot of conversations about phasing in.  There are benefits to it, but where does the risk outweigh the benefit?” says Hough. 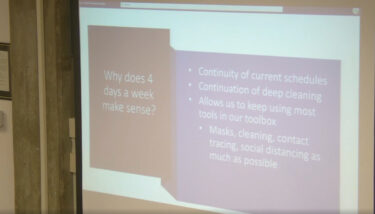 The final option is moving towards to a four day instructional week for those on site students.  The board and administration showed great interest in using this as a possible option.
One of the targets is to remain in the hybrid model until Oct 30, while continuing to closely monitor gating activity with medical advisory. If the district sees that improvement happening, then it will increase on site learning days.  But if the in district metrics, such as the staff quarantine rate increasing 30% in one week, keep trending downward, then the district will not be in a position to open up more even with the community positivity rate going down.
“We want face to face learning, we want people back as much as possible, but we want to do it safely too,” says Reid.
The target date for the four day schedule could be Nov 2, if the data supports it.  Staff hopes to have a recommendation for the board by their Oct 21 meeting.  No action was taken at this time.
You can watch the meeting in its entirety on the USD 383 Facebook page.
Share. Twitter Facebook Pinterest LinkedIn Tumblr Email