You are at:Home»Local News»USD 383 to start school year in hybrid learning model
Manhattan-Ogden USD 383 will start the school year with their hybrid model of learning.
The announcement was made during the school board meeting where Final Draft 2 of the plan was presented.  Superintendent Dr. Marvin Wade says the plan will allow for students to be spread out and lessen the number of people in each building.
The hybrid model will be for those students who chose the on site learning method.  Students will be put into two groups and rotate between being on site and using distance learning.
Assistant Superintendent Eric Reid says after registration ends on Aug 12, they should have the results of which students will be in which group within a week, on Aug 19.
“I wish we could do better, but the only way we can do better on that timeline is to ask parents to have enrollment done earlier and I don’t think that is appropriate,” says Reid.
Reid says the hybrid schedule will be written for a few weeks ahead, not the entire year.  The reason behind this is if the district needs to switch between learning methods.  They also don’t expect to be using this method all year. 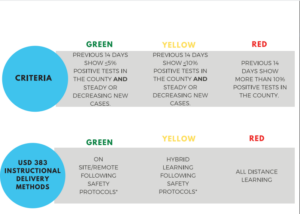 The district is using a color coordinated method to determine what learning method they will use. The method is split between three colors; Green for on site and remote, yellow for the hybrid model, and red for all distance learning.

Wade says the model was created with the criteria from the Riley County Health Department. The green and yellow models need to show less than 10% positive cases, and steady or decreasing number of new cases.  The red model means over that 10% and the whole district will switch to all distance learning.

The percent positive is calculated by taking the number of positive cases divided by the number of tests administered.   Wade says the health department will start putting these percentages out so that parents and community members do not have to do the math themselves.
Wade says they are using the guidance from Riley County because that is where the district’s offices are located, even though the district is more than one county.  According to the math, the county is at 9.07 positive tests putting the district in the yellow category.
Reid says these numbers will take place over a longer span of time, so they are not changing methods daily.  This would put too much of a burden on staff and parents.  If the district needs to change methods, they will make an announcement a week in advance.
“We’re gonna try and get in front of those things to anticipate and give people the time they need. People need to know that information as in advance as possible, while still being relevant to the numbers,” says Reid.
Reid says as of Wednesday morning, they have 66% of their students registered so far, and have had parents switch between learning methods.  Staff needs these decisions made by the end of registration.  This is because they will need to establish how many teachers will be needed for on site and for remote.  Parents will be able to change the learning method, but that student will not be put in a different method until after school starts.
“It’s gonna be very very different and we’re gonna be scrambling a week before school starts.  That’s why we want people to lock in on the Aug 12, because there’s a lot of things that have to change and if people keep changing after that and we try to accommodate that? It’s gonna be difficult enough as it is,” says Reid.
The full Final Draft 2 of the reopening plan can be found on the district’s website. The first day of school is scheduled for Aug 26.
Share. Twitter Facebook Google+ Pinterest LinkedIn Tumblr Email