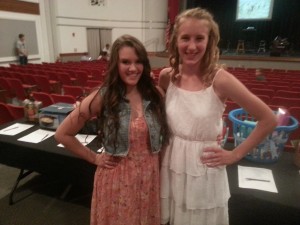 Over one hundred people gathered in the auditorium of Wamego High School tonight as well as to participate in a silent auction, with both events raising money for the victims of the Moore Oklahoma tornado. Wamego high student Alexis Pettay spearheaded the event, and she says she was inspired to do something for Moore after watching a benefit concert presented by country music star Blake Shelton. She asked her friend Maggie Shermoen to assist, and in just a matter of weeks, the two friends had everything ready for the fund raising event.

Each performance was given by a member of the Wamego community and styles ranged from pop, country, christian, and bluegrass. The event concluded with a patriotic salute to the military with each branch of the armed forces having their song played. Current and former members of those branches were asked to stand as their song played so they may be recognized and thanked for their service.