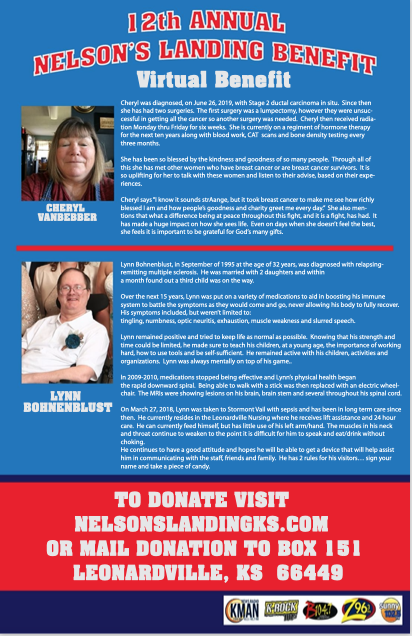 The 12th Annual Nelson’s Landing Benefit will assist Cheryl VanBebber and Lynn Bohnenblust with their medical needs and expenses. More information about the benefit can be found at nelsonslandingks.com. (Photo courtesy of Nelson’s Landing)

The show will go on this year for the 12th Annual Nelson’s Landing Benefit despite the ongoing coronavirus pandemic, but this time it will be in a virtual format.

The benefit, which typically includes events such as an auction and a golf tournament, will only consist of t-shirt purchases and virtual donations through the Nelson’s Landing website.

Contributions from this year’s benefit will go towards helping pay for the medical bills of Cheryl VanBebber, who is being treated for breast cancer, and technology that will assist Lynn Bohnenblust, a resident of Leonardville Nursing Home who has had multiple sclerosis since 1995, in communicating with family, friends and nurses.

“It’s just allowing them to not have the burden of extra bills when times are already tough,” Jordy Nelson, a former K-State and NFL football player whose parents own Nelson’s Landing, said. “So much when people are struggling mentally and physically, the burden of finance can be that much more on them and their families.”

The benefit will pay for what remains of the beneficiaries medical bills after medical insurance has been applied.

In the 12 years since his family’s first benefit, the Nelson’s Landing Benefit has seen quite a bit of support from the local community.

Nelson says while much of the support has come from individuals, it has also come from local businesses in towns such as Clay Center, Junction City, Manhattan, Wamego, Riley and Leonardville.

“We’ve been blown away with the support over the 12 years of the people in the local community that support it every year,” Nelson said. “You can tell people want to help other people. They just need to be given a chance and an opportunity to do it.”

The permanent closure of Nelson’s Landing, which is a sports bar in Leonardville, was announced earlier this year on May 17.

Despite the closure, Nelson says they hope to hold a benefit next summer in the same way that it has been put on in past years.

Those wanting to order a t-shirt for this year’s benefit need to do so by Aug. 1.

For more information about the Nelson’s Landing Benefit and the people to whom contributions will go, visit nelsonslandingks.com.