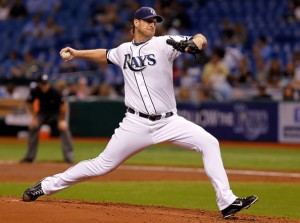 ST. PETERSBURG, Fla. (AP)   Jeff Niemann won his sixth consecutive decision, Ben Zobrist had a two-run triple and the Tampa Bay Rays completed a four-game sweep with a 4-1 victory over the Kansas City Royals on Thursday.  The Rays first four-game home sweep since July 28-31, 2005, included an 8-7 win Wednesday night in which Tampa Bay scored five times in the ninth.

Niemann (7-4) allowed one run and nine hits over 6 1-3 innings.  The right-hander is 6-0 in nine starts since returning from a strained lower back.  Kansas City rookie left-hander Danny Duffy (3-6) gave up three runs and five hits over seven innings.

The Royals will lick their wounds in Chicago against the White Sox for a three-game series.  First pitch on Friday night will be at 7:10pm.