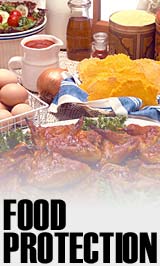 Denny’s on Tuttle Creek Boulevard was leveled with the most violations at 10, the majority of which were corrected on site, though it was noted the thresh hold of the back door was worn down enough for pests to enter the kitchen.

Colbert Hills and Mr. K’s were both hit with nine violations, while Ingredient and Sonic both had six critical violations.  Again most correctable at the time of the inspection.

All the inspections were carried out between July 18th and July 20th.