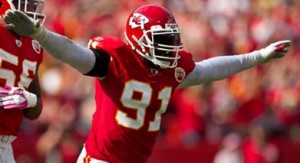 ST. JOSEPH, Mo. (AP)   Tamba Hali thanked Kansas City Chiefs owner Clark Hunt and his family, then talked about getting back to work.  Kansas City’s star linebacker spoke with reporters Tuesday for the first time since signing a five-year, $60-million contract last week.  The Chiefs placed the franchise tag on Hali during the offseason, but there was no lengthy holdout from a player coming off of a career year in which he had 14.5 sacks.  Hali’s deal made him the second-highest paid outside linebacker in the league behind Dallas’ DeMarcus Ware.  The contract included $35 million guaranteed.