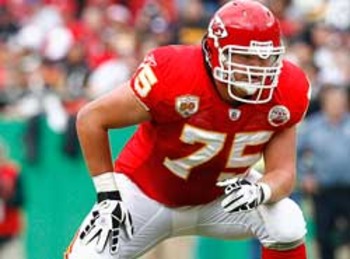 KANSAS CITY, Mo. (AP) The Kansas City Chiefs have placed offensive tackle Ryan O’Callaghan on injured reserve and released backup kicker Todd Carter to reach the 80-player roster limit before Tuesday’s deadline. O’Callaghan had missed nearly all of training camp with an undisclosed injury. He was picked up off waivers before the 2009 season and started 12 games that year, but he was injured in training camp last season and Barry Richardson took over the starting job. Carter was signed on Aug. 10 as a second kicker in camp, but he’s played sparingly in three preseason games and never challenged Ryan Succop for the starting job.

The Chiefs play Green Bay in their final preseason game Thursday night. The game kicks off at 7:00pm at Lambeau, and will be joined in progress on SportsRadio 1350 KMAN at 8:00 after the Bill Snyder Show.  The Chiefs must cut down to 53 players by Saturday.