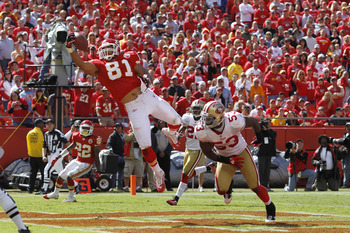 ST. JOSEPH, Mo. (AP) Tight end Tony Moeaki has been removed from the Kansas City Chiefs’ physically unable to perform list and participated in their morning walkthrough Monday. The second-year player from Iowa ran some routes for the first time since he was placed on the PUP list at the beginning of training camp.  The Chiefs have not said what was wrong with Moeaki, but he spent more than a week watching from the sidelines at Missouri Western State University.  Moeaki caught 47 passes for 556 yards and three touchdowns his rookie season.

Wide receiver Jonathan Baldwin, the Chiefs’ first-round draft pick, did some light running Monday.  He had not practiced since Thursday’s walkthrough. Defensive end Glenn Dorsey sat out for the third straight day since he was carted off the practice field last Thursday with an undisclosed injury.