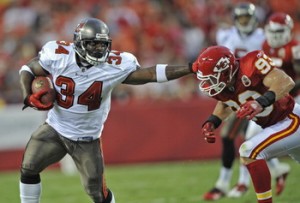 ST. JOSEPH, Mo. (AP) The Kansas City Chiefs have a kicking conundrum, just like the rest of the NFL.  New rules putting kickoffs at the 35 yard line were designed to prevent injuries caused by high-speed collisions in the return game, but moving the placement five yards nearer midfield also took much of the drama out of special teams.  Just about every kicker in the NFL now has the ability to boom the ball into the end zone. The decision that coaches face is whether to actually do that.  Kansas City has been toying in training camp with a variety of kicks, hoping speed in the coverage unit will allow it to trap opposing teams inside the 20.  They are likely to experiment more on Friday night at Baltimore.  Kickoff is at 6:30pm and coverage begins on SportsRadio 1350 KMAN at 5:30 from the Chiefs Fox Football Radio Network.