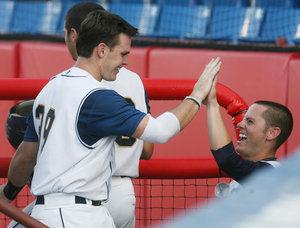 K-State sophomore catcher Blair DeBord has earned a spot on the National Baseball Congress World Series All-American team.  DeBord went 5 for 13 with a double, a triple and an RBI in four games throughout the tournament, playing for the Topeka Golden Giants.  The Golden Giants went 2-2 in the NBC World Series.