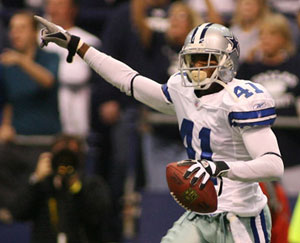 SAN ANTONIO (AP) Cowboys cornerback and former K-State star Terence Newman likely will miss the entire preseason for the second time in four seasons because of a groin injury.  Newman got hurt in practice Wednesday when he got tangled with a receiver during pass coverage drills. He later posted on his Twitter account, “A little groin pull and be back for the Jets!”  The Cowboys’ season opener is Sept. 11 at New York.  Newman, going into his ninth NFL season, missed all four preseason games in 2008 because of a groin injury.  He returned for the season opener, but later missed five games because of a sports hernia and played a career-low 10 games that season.

Salvy to have thumb surgery, expected to return in ’22