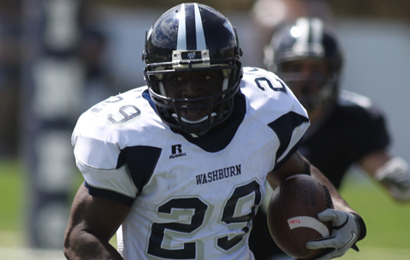 TOPEKA, Kan. (AP)   A former Washburn University football player has pleaded guilty to robbing a Topeka credit union earlier this month.  The U.S. Attorney’s office says 21-year-old Vershon Moore, of Topeka, faces up to 25 years in prison following his guilty plea Tuesday to one count of bank robbery.  A co-defendant who worked at the Envista Credit Union is awaiting trial.  Federal prosecutors say Moore pulled up to the credit union on Aug. 9, showed a gun and demanded money from two employees filling an ATM with cash.  He then drove away.  Investigators learned Moore’s co-defendant had provided him information about the schedule for filling the ATM.  The stolen money and a gun were recovered from her home.   Moore was a star senior running back at Washburn. He was dismissed from the team after his arrest.