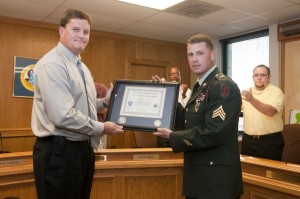 FORT RILEY, Kan. – A Fort Riley Soldier received a certificate of appreciation from Junction City Mayor Pat Landers this week for his help in apprehending a suspect fleeing local police in June.

Sgt. Steven Zimmerman was on his way home from Wal-Mart June 26, when he saw the suspect running away from the Geary County Sheriff’s office. Zimmerman, who was closer to the suspect than the pursuing deputies, stopped his vehicle and took up the chase.

Zimmerman says “There wasn’t much of a thought process.” He says he just saw some brothers in trouble that needed help, so I put the car in park and did what he could.

Zimmerman tackled the suspect, and detained him until the deputies caught up.

Mayor Pat Landers and Police Chief Tim Brown presented Zimmerman with the certificate in a small ceremony before a city hall meeting.