A Fort Riley woman has pleaded guilty to assisting in the desertion of her husband from the Army while authorities were investigating the death of her eight-week-old son according to U.S. Attorney Barry Grissom on Monday.

22-year-old Erika Suzanne Pierret Frey of Fort Riley pleaded guilty to one count of enticing desertion and harboring a deserter.  In her plea she admitted that she and her husband, Private Austin A.J. Frey, fled from Fort Riley during an investigation following the death of her infant son.

Fort Riley Police were called to the Frey Household on April 25, 2011, where they found one of Frey’s twin infant boys unresponsive.  The boy died a short time later at Children’s Mercy Hospital in Kansas City Missouri.  The child displayed serious physical injuries.

On May 31, Private Frey failed to report for duty.  Investigators learned he and his wife had driven south to Mexico and then re-entered the United States before going to Waveland Mississippi, where they were arrested.

Erika Frey is set for sentencing on November 21st.  She faces a maximum penalty of three years in federal prison.  Army Criminal Investigation Division conducted the investigation, and Assistant U.S. Attorney Jared Maag is handling the prosecution in the case. 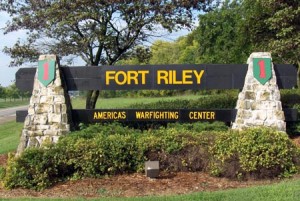