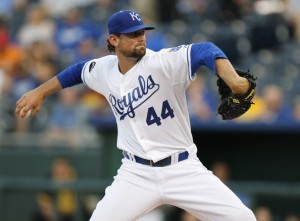 KANSAS CITY, Mo. (AP)   Luke Hochevar pitched neatly into the eighth inning, Billy Butler homered and drove in four runs and the Kansas City Royals beat the Orioles 6-2 Wednesday night.  Hochevar (8-8), the first player picked in the 2006 draft, is 4-0 in his past seven starts and has matched the longest winning streak of his career.  He also set a personal high for wins in a season, having gone 7-13 in 2009.   Hochever allowed one earned run and four hits in 7 1-3 innings. He struck out seven, walked one and retired 16 straight batters during one stretch.  Jeremy Guthrie (5-15) yielded six runs on eight hits in seven innings.  He leads the majors in losses.