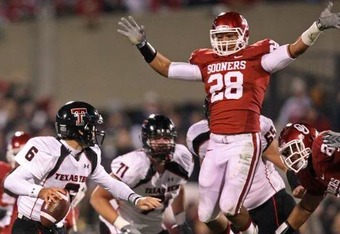 NORMAN, Okla. (AP) Oklahoma head football coach Bob Stoops says starting linebacker Travis Lewis has broken his foot and will miss up to eight weeks.  Stoops said in a news release Tuesday that Lewis broke a bone in his left foot during Monday’s practice.  Stoops said sophomore nickel back Corey Nelson will move to Lewis’ spot at linebacker.  Stoops said the injury to Lewis is disappointing but said the team will adapt.  Lewis is a senior from San Antonio and has led OU in tackles each of the past three seasons.  OU trainer Scott Anderson said Lewis’ injury does not require surgery and will be treated with rest and immobilization.