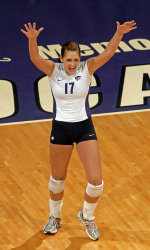 ATLANTA, Ga. – The Kansas State Wildcats swept their way to their first win of the season over Tennessee Tech on Saturday afternoon, and Kaitlynn Pelger put her name near the top of the record books in the process. Pelger led the Wildcats with an impressive 13 kills in the win over the Golden Eagles, but more impressive was her hitting percentage of .800 that ranks fourth all-time in K-State history for a three-set match.

K-State (1-2) got the win 25-19, 25-17, 25-16 with a flurry of offensive production and a strong block. The Wildcats hit .372 for the match compared to Tennessee Tech’s (0-3) .107 thanks to 10 blocks from the Wildcats. Eight of those blocks came from redshirt freshman Taylor Johnson making her career debut for the Wildcats. Johnson also added four kills and a hitting percentage of .333.

The Wildcats saw solid production out of sophomore outside hitter Lilla Porubek for the third straight match as well with 10 kills and a .333 hitting clip. Sophomore Courtney Traxson saw extended action for the Wildcats and made her presence more than felt both attacking and blocking. Traxson pounded out seven kills on eight attacks for a nearly perfect day. She also was in on three blocks. Caitlyn Donahue had a solid day directing the K-State offense with 39 assists. Donahue added two aces, three digs and three blocks to her line as well.

After a slow start, the Wildcats were able to right the ship midway through the first set after trailing 13-9. A kill by Courtney Cook sparked the momentum shift as K-State would score five of the next six points to reclaim the lead at 15-14. From there, the Wildcats outscored the Golden Eagles 10-5 to close out the first set with the win 25-19.

In the first set, Pelger continued to pour it on as she did for the Wildcats during the first two matches of the tournament with six kills on a .625 hitting percentage. Cook and Porubek each added three in the first set.

K-State got into more of a rhythm in the second set hitting .367 as a team and taking advantage of an 8-1 run to open up a large lead midway through. A series of blocks by Donahue and Johnson helped push Tennessee Tech to the edge before a kill by Traxson ended it 25-17.

The Wildcats kept it coming in the third set with more Pelger and Porubek, but it was Traxson and Johnson that put the match out of reach. K-State went on a 12-2 run in the third set that saw the pair responsible for 11 of those points in some way. That run put the Wildcats ahead 18-8 and it was a matter of time until the door was fully closed on the Golden Eagles.

K-State will return home to take on 2010 NCAA Tournament team Creighton on Tuesday at Ahearn Field House. First serve is set for 7 p.m., and K-State Athletics is preparing for the K-StateHD.TV Launch Party that night as the match will be the first live sporting event on the newly announced online network. The K-State Ticket Office is offering general admission bench tickets for just $1 for the match in honor of the launch party.