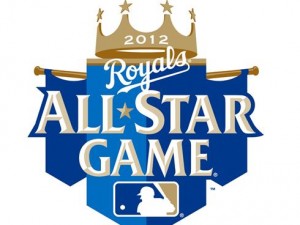 KANSAS CITY, Mo. (AP)   The official logo for the 2012 All-Star game has been unveiled.   Next year’s game is at Kauffman Stadium in Kansas City, and the Royals were well-represented when the logo made its debut Tuesday.  All-Star relievers Aaron Crow and Joakim Soria and manager Ned Yost all attended the unveiling.  Kansas City has not hosted the All-Star game since 1973, leading mayor Sly James to declare, “I just want to say to Major League Baseball: We’ve missed you.”   The Royals’ blue and metallic gold are in the logo, which has a family crest, accompanied by flags and adorned with stars.