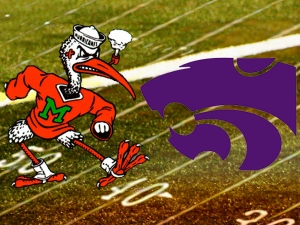 MIAMI (AP) Kansas State coach Bill Snyder says he isn’t happy about having to come to Miami this weekend.  The Wildcats’ scheduling history offers some hints why.  This is only the ninth time in the last 16 seasons that Kansas State is hitting the road for a September nonconference game.  And the Hurricanes figure to provide Kansas State with a considerably tougher test than Eastern Kentucky and Kent State did for the first two games of the Wildcats’ season.  Miami is coming off a 24-6 win over Ohio State and looking its first two-game winning streak since October.  Kansas State is trying to post consecutive 3-0 starts for the first time since 2005 and 2006.