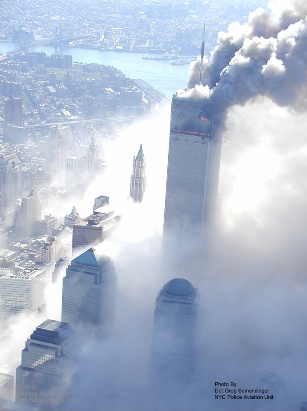 Nearly 20 firefighters from Manhattan and Junction City fire departments will be participating in a 110 story memorial stair climb in Kansas City this coming weekend, to recognize the 343 firefighters lost on 9/11 of 2001. Manhattan Firefighter Matt Carlson says it puts things in perspective. Carlson says the dozen participants from M-F-D represent a range of positions from student firefighters to a chief officer.
Junction City Firefighter Nathan Dixon tells KMAN each participant will represent one of the 343 firefighters killed on that day. Dixon says he has many similarities with his firefighter, Joseph Mateo-with sons exactly the same age, preparing for testing for the Lt. position, even both scuba divers.

And some changes in Fort Riley’s 9/11 Ceremony of Remembrance and 9/11 Commemoration Ceremony, earlier announced on KMAN. The event is still set for 9 a.m. Sept. 11 at the Global War on Terrorism Monument in front of the U.S. Cavalry Museum. The event is open to the public and will commemorate those killed during the Sept. 11 attacks and recognize the family members. Additionally, the ceremony will honor the children of fallen service members and children will receive a medal to convey an expression of appreciation and gratitude to those whose parent paid the ultimate sacrifice; the First Infantry Division Band will provide music; and there will be a “by name recognition” of the family members of the fallen soldiers. The guest speaker will be Maj. Gen. William Mayville, 1st Infantry Division and Fort Riley Commanding General.

An hour of service to honor our troops, veterans and military families doesn’t seem to be too much to ask, especially in light of the 10th anniversary of 9/11. And that’s what RSVP of the Flint Hills is asking members of the public, with a booth at the Manhattan town center through Sunday,from 11 a.m. to two p.m. each day. RSVP Volunteer coordinator Kendra Dekat tells KMAN anyone can participate. And any individual can also pledge an hour or two of community service. Hopes are to get at least 750 pledges.

National Day of Service is set for Saturday, September 10th, in honor of the 9-11 anniversary. Katie Vine, student program coordinator in charge of project development with Hands On Kansas State indicates volunteers will serve local organizations in honor of those who stepped up in service after the 9-11 attack 10 years ago. Volunteers will be helping that day, from nine until four. To volunteer, go to Handson.ksu.edu.