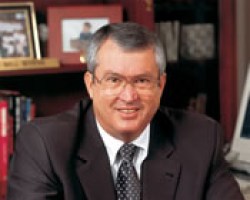 HOUSTON (AP)   Texas A&M athletic director Bill Byrne is speaking out after his school’s decision to leave the Big 12.  In a blog posted Wednesday, Byrne says the departures of Nebraska and Colorado and the creation of the Longhorn Network at rival Texas made the Big 12 “considerably different” than it was last summer — when he said the Aggies should remain in the league.  The blog was posted a few hours after Texas A&M told the Big 12 it plans to leave the league by July 2012 if it is accepted by another conference.  The Aggies have expressed interest in joining the Southeastern Conference.  Byrne says other developments “have caused a great deal of uncertainty within the Big 12,” and says the “landscape” of the league “was altered by the creation of the Longhorn Network.”  He mentions the network’s attempts to televise high school games and the “attempt to coerce Big 12 schools to move their football games in Austin” to the network.  Byrne also says that Texas A&M was not offered the chance to join the Longhorns in the venture.