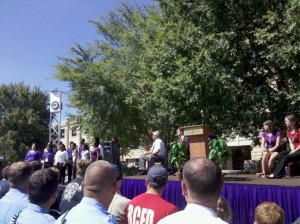 This weekend has been a weekend of remembrance and reflection.  Ten years ago, the United States was shaken with the attacks that took so many lives.

On September 11, 2011 in the Bosco Student Plaza, the UPC brought together an array of speakers.  They had Nate Spriggs, 2011-2012 Student Body President, Brandon Kauffman, 2001-2002 Student Body Vice President and Mayor of Manhattan Jim Sherow.

Each discussed a different point on what happened then and where we as a community and a country are now.

There was also a Presentation of Colors from the Pershing Rifles, the Star Spangled Banner performed by In-A-Chord, Amazing Grace performed by the United Black Voices and Taps performed by Anthony Ross, sophomore in computer engineering.