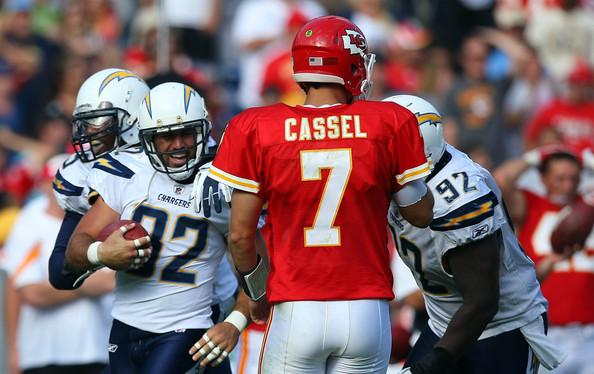 SAN DIEGO (AP)   Eric Weddle intercepted Matt Cassel at midfield with 55 seconds left to preserve the San Diego Chargers’ 20-17 victory over the winless Kansas City Chiefs on Sunday.  Kansas City got the ball back at its 33 with 1:26 left after Philip Rivers was stuffed on fourth-and-1 at the Chiefs 34.  Out of timeouts and hoping for a huge upset, Cassel threw for 24 yards to Leonard Pope to get into Chargers territory.  On the next play, Cassel, under pressure and backpedaling, threw the ball right to the blitzing Weddle, who signed a $40 million contract in the offseason.  Ryan Mathews scored twice and the uninspiring Chargers overcame two more interceptions by Rivers to improve to 2-1 for just the second time in Norv Turner’s five seasons as coach.  The Chiefs dropped to 0-3.