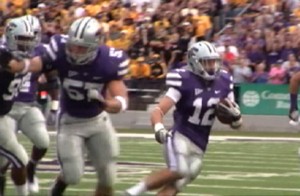 Click here for FREE Video Wrap-Up of the Cats win over Mizzou.

The Cats came into Saturday’s Big 12 contest with 2-2 Missouri ranked #20 in the country, undefeated, but somehow still the underdog in the game.  After a 24-17 victory over the Tigers there certainly can be no more questions, this is a good football team.  The Cats were again led by their defense who held the potent Mizzou offense almost 200 yards under thier per game average.  The tone was set early with a Ty Zimmerman interception of James Franklin’s first pass of the game which lead to an early 7-0 KSU lead.  On offense it was the ground game that again dominated the clock with John Hubert churning out 126 tough yards and Collin Klien punching it in for 3 short yardage TDs.  Highlights, analysis, and interviews with Coach Snyder, John Hubert, Tre Walker, Chris Harper, Vai Lutui, Tysyn Hartman, and BJ Finney are all featured in this Gameday Network Wrap-Up Video.

Wesley Fair learning to play with intelligence, not only athleticism