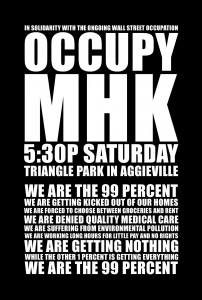 If you see a large gathering at Triangle Park Saturday night, don’t be surprised. A group calling itself “Occupy MHK” is planning a three hour effort, as part of international protests against what they call corporate greed.

“The movement started on a national level on September 17 in New York City,” Jeremy Smith, one of the event organizers, said. “It’s spread to over 1,300 cities since then.”

While he is one of the organizers, Smith indicates there’s no real leader of the local group, which began to organize primarily through social networking such as Facebook. Scott Poister is also involved in the local effort and he points out one real concern at the Manhattan level.

“Even in Manhattan, they’re talking about all funding for non-profit organizations,” Poister told KMAN. “And that’s the kind of thing some people are trying to survive on.”

However Poster says the issues are very wide, and range  from job markets, mortgages, student loans, to the environment.