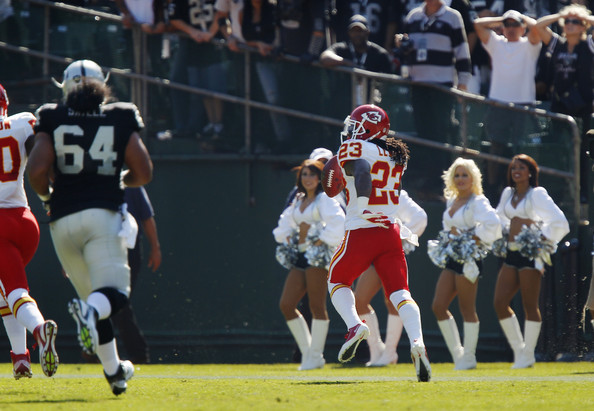 OAKLAND, Calif. (AP) Kendrick Lewis and Brandon Flowers returned interceptions for touchdowns and the Kansas City Chiefs took advantage of rusty quarterback play from Kyle Boller and Carson Palmer to beat the Oakland Raiders 28-0 on Sunday.  Boller became the first Raiders quarterback in 13 years to throw three interceptions in the first half, including Lewis’ 59-yard score on the first drive of the game for Oakland (4-3).  Palmer relieved in the second half and threw three more interceptions, including one that Flowers returned 58 yards to give the Chiefs a 28-0 lead early in the fourth quarter.  Javier Arenas and Le’Ron McClain each added touchdown runs for the Chiefs (3-3) on a day the Kansas City offense didn’t have to do much at all.