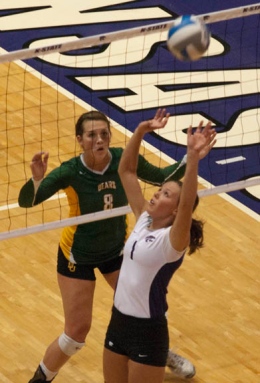 K-State couldn’t quite rally against Baylor on Saturday night, as the Bears prevailed in five sets in Waco.  Baylor took the first two sets, 25-21 and 25-22, before the Cats evened the match with wins of 25-18 in set three and 25-14 in the fourth.  But, the Bears gained an edge midway thru the final frame and held off K-State 15-13 for the win.  Kaitlynn Pelger led K-State with 20 kills and 14 digs.  Two other players also had a double-double, Kathleen Ludwig had 17 kills and 10 digs, and Caitlyn Donahue added 51 assists and 16 digs.  Five Bears reached double digits in kills led by Adri Nora with 17.

K-State has a bye on Wednesday, and will host Texas A&M on Saturday.  The Aggies swept the Cats in College Station.