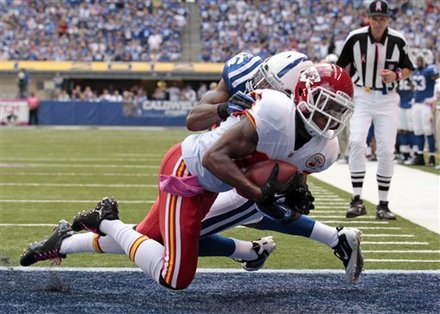 INDIANAPOLIS (AP)   Matt Cassel threw for 257 yards and four touchdowns, and Kansas City scored the final 21 points to pull out a 28-24 victory over the winless Indianapolis Colts.  Dwayne Bowe and Steve Breaston each caught two TD passes to give the Chiefs (2-3) their first win at Indianapolis.  The 17-point comeback matched the biggest comeback in team history.  With Peyton Manning watching from the sideline, Curtis Painter had a brilliant first half.  He was 12 of 17 for 237 yards with two TDs and a quarterback rating of 152.2 as the Colts (0-5) built a 24-7 lead.  But Cassel found Breaston for a 16-yard TD pass just before halftime and Bowe on a 5-yard score with 40 seconds left in the third quarter to get the Chiefs within 24-21.  Then, with 5:15 left in the game, Breaston caught the 11-yard go-ahead score.