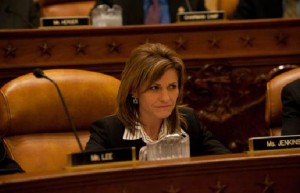 Second district Congresswoman Lynn Jenkins is pleased with last week’s passage of trade agreements for Panama, Colombia, and South Korea, describing it as possibly the one and only big win for Washington this fall. She says the actions were taken after five years of what she terms “lingering in the oval office.”

Jenkins adds an estimated quarter of a million jobs are expected to be created as a result of the trade agreements, with a direct impact on Kansas.

Jenkins also commented on health care and continuing concerns about the national debt.

She was in town to speak to the Wamego Chamber of Commerce, and to celebrate her daughter’s birthday, who is a student at Kansas State.