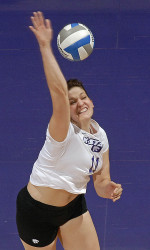 The K-State volleyball team couldn’t extend its winning streak to double digits as Texas A&M earned a sweep on Saturday night in College Station. The Aggies halted the Cats’ string at 9 wins in a row with a 25-22, 25-20, 25-18 victory at Reed Arena. The A&M block was key with 10 stuffs including nine from Lindsey Miller. The Aggies gameplanned against K-State’s Kaitlynn Pelger, who wound up with just eight kills. Lilla Porubek led the Cats with 12 kills and a .473 hitting percentage.  Kelsey Black led the A&M effort with 16 kills.

K-State will host #16 Iowa State on Wednesday night at 7:00 pm at Ahearn Fieldhouse. Coverage begins at 6:30 on KMAN.