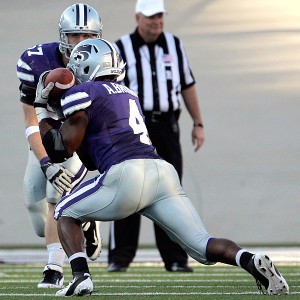 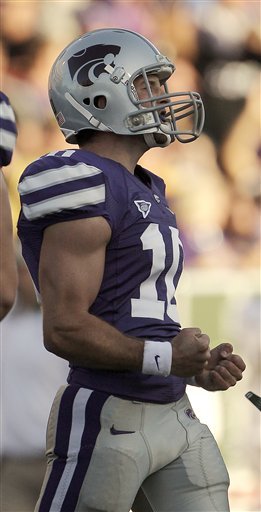 Two K-Staters have been named Big 12 player of the week following K-State’s 36-35 upset victory over #15 Baylor.  Linebacker Arthur Brown is the Big 12 defensive player of the week, and is the second straight Wildcat to receive the honor after Tre Walker did so a week ago.  Brown became the first player to intercept a pass thrown by Bears’ QB Robert Griffin this season.  Brown’s pick set up the Cats’ game winning field goal in the fourth quarter, and he had a sack and a tackle on Baylor’s final drive of the game.  He recorded eight tackles in the game, and 1.5 sacks.

K-State kicker Anthony Cantele drilled a career high three field goals against the Bears including the game winner.  Cantele was named the Big 12 special teams player of the week.  He kicked field goals of 28 and 37 yards in the first quarter to give the Cats an early lead, and then connected on a 31-yarder to ultimately give the Cats the win with 3:10 left to play.

Texas A&M’s Christine Michael was named the Big 12 offensive player of the week.  He rushed 32 times for 230 yards and three touchdowns in the Aggies’ 42-38 loss to Arkansas in Dallas on Saturday.