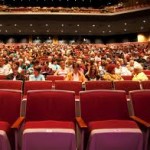 A man was taken by law enforcement officials from McCain auditorium Wednesday, during the Kansas State Landon lecture.

Ryan Leathers, 38,  of Manhattan was arrested at McCain auditorium shortly after 11:30 Wednesday morning. Charges include disorderly conduct and obstructing the legal process, with a bond for Leathers set at 750 dollars.

The man caused a disturbance by speaking loudly during the question portion of former Senator Alan Simpson’s presentation. He also tried to interrupt the former Senator before law enforcement took him away.

When it was all said and done, the disturbance at McCain Auditorium didn’t end up being as serious as it might have first appeared, but Kansas State police are always prepared for all the possibilities. That’s according to K-State police Captain Don Stubbings who says if something draws his officers’ attention to a member of the audience that indicates possible danger, they don’t hesitate to react. While it was determined after the investigation, there was no real threat, Stubbings says the increasing odd behavior gained law enforcement officials’ attention.

Meanwhile, Leathers does have a history with area law enforcement officials. Pottawatomie County Attorney Sherri Schuck confirmed Friday Leathers was arrested in Pottawatomie County and charged in 1999 with felony drug offenses.  Schuck adds the case was dismissed June 16, 2010, due to the age of the case and lack of available witnesses.