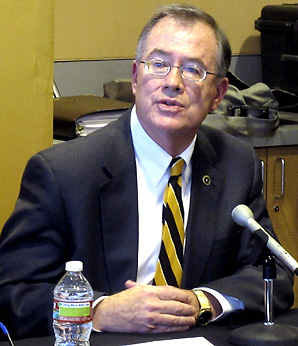 COLUMBIA, Mo. (AP)   University of Missouri Chancellor Brady Deaton has decided to remain in Columbia rather than take an overseas trip as he decides whether the school should leave the Big 12 Conference. Deaton was scheduled to leave Tuesday for a 9-day international conference in India.  Instead, school spokeswoman Mary Jo Banken said Monday that the chancellor won’t go so he can deal with other duties in his office that are more important.  Missouri is mulling a move to the Southeastern Conference.  University curators gave Deaton authority earlier this month to explore leaving the Big 12, which has lost three members in the past year.  The SEC website last week mistakenly posted an announcement that Missouri was joining the league.  The premature announcement was quickly pulled from the site.