The Occupy MHK protests hit the streets of Manhattan Saturday evening at Triangle Park to take a stand against what they see as a widening wealth gap in the United States, and the political atmosphere they believe is helping to facilitate the status quo.

In a flyer the protesters expressed the  core values of believing that “Wall Street has iron control over economic policies of this county and that one party is a wholly owned subsidiary of Wall Street and the other party caters to them as well….. We are the 99 percent. We are getting kicked out of our homes.  We are forced to choose between groceries and rent.”

The protest was peaceful, and the only problem organizers saw was a Ron Paul sign carrying pair that they felt diminished their message of system change.  Event organizer Jeremy Smith said “We asked him to leave.  We don’t support any political candidate, or political party.. it is contrary to our message.”

Protesters amounted to around 180 people according to the event organizers, and they hope that the protest would show support to other movements occurring in the United States and around the world. 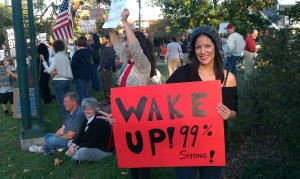 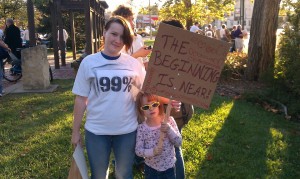 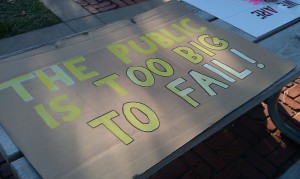