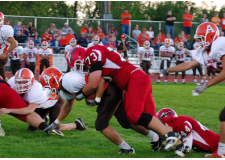 High school football players often overcome hardships to play the game that they love, but few have battled more than Wamego’s James Manning.  Manning went in for a routine physical this July to clear him for his senior season.  But his doctor discovered Manning had testicular cancer.  He had surgery five days later, where the diagnosis was confirmed, and the cancer removed.  Just five weeks later, Manning was declared cancer-free and cleared to play football for the Red Raiders.  He started all nine games this season.

Manning is now one of 50 semifinalists nationally for the Rudy Award, which is named after the former Notre Dame walkon that sparked the movie “Rudy.”  The award is given to the most inspirational high school football player in the country.  $25,000 in scholarships will be handed out, with the winner receiving $7,500.  To vote for Manning, go online to HighSchoolRudyAwards.com.

MHS Soccer to Host 6A Quarters