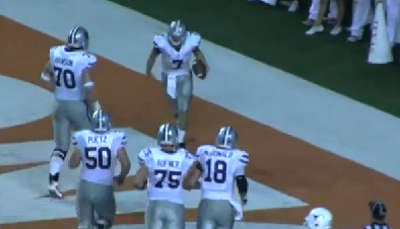 Click here for full video wrap-up of the Cats 17-13 win in Austin.

It wasn’t pretty, but it goes in the record book the same as all the others, a nerve wracking contest decided in the final minute. The Cats leaned heavily on thier defense to score a 17-13 win in Austin, K-State’s fourth straight win over the Longhorns. The wildcats struggled mightily all night on offense, posting just 121 total yards. Klein was sacked 5 times, but found just enough points to win on a TD pass to Chris Harper just before half-time and on a 3rd quarter TD run. The Wildcat defense was the story with 2 huge interceptions and holding on as Case McCoy’s final pass fell incomplete as time expired. Coach Snyder was visibly upset with the performance of his offense after the game. Highlights, postgame interviews, and analysis of the Cats 9th win of the season are all part of our game wrap up video.

Video Wrap up from TheGamedayNetwork.com