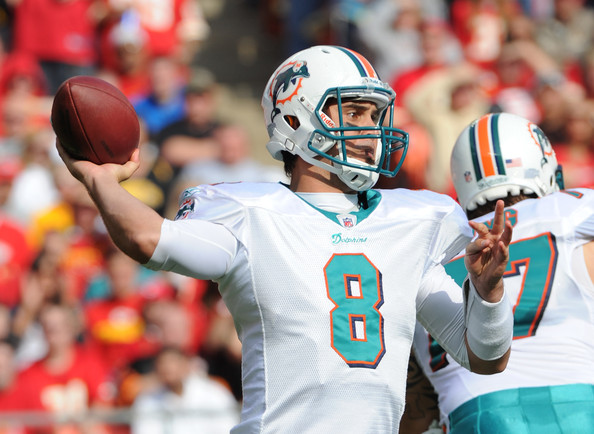 KANSAS CITY, Mo. (AP) Matt Moore threw for 244 yards and three touchdowns, Reggie Bush had 92 yards rushing and another score and the Miami Dolphins won their first game of the season in a big way, 31-3 over the Kansas City Chiefs on Sunday.   Moore, who took over after Chad Henne had season-ending shoulder surgery, became the first Dolphins quarterback since Chad Pennington in 2008 to throw three TD passes.  Two of them went to tight end Anthony Fasano and another to Brandon Marshall, who finished with eight catches for 106 yards.  Miami (1-7) and Indianapolis had been the winless teams left in the NFL, but the Dolphins had come close to breaking through the past two weeks.  They blew a 15-point lead in an overtime loss to Denver and a seven-point lead last week against the New York Giants.  Matt Cassel was 20 of 39 for 253 yards for Kansas City (4-4).

Chiefs Kingdom airs at 7:06pm on Monday night on SportsRadio 1350 KMAN.  The Chiefs will host the rival Broncos on Sunday at noon, and the game will air live at KMAN from the Chiefs Fox Football Radio Network.