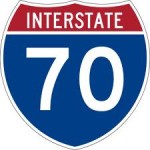 A fatal car accident that reportedly happened more than two weeks ago in Geary county has just been discovered and reported by the Kansas Highway Patrol. James Brown, 67,  of Memphis, Tennessee died in the one vehicle accident.

According to the KHP, Brown was driving a ’94 Ford Ranger on I-70 at westbound milepost 309, about eight miles east of Junction City on October 25th. The vehicle left the roadway for an unknown reason and came to rest  in the East ditch.