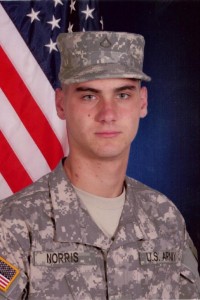 Pfc. Cody Norris, 20, of Houston, was on patrol in Kandahar Province when his unit came under small arms fire Nov. 9.

Norris joined the Army in October 2010 as an infantryman. This was his first deployment. His awards include the Army Commendation Medal, National Defense Service Medal, Afghanistan Campaign Medal with two Campaign Stars, the NATO Medal, and the Combat Infantryman Badge.

Norris is the third Soldier from 2-34 Armor killed in action since the unit deployed to Kandahar province from Fort Riley in early 2010. The unit is attached to Task Force Spartan.