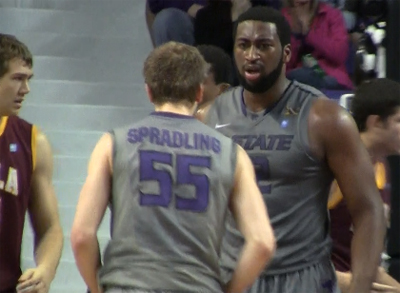 The Cats got off to another sluggish start early, but lead at the half and pulled away late for a 74-61 win over Loyola Chicago 74-61 to move to 2-0 on the season. Freshman forward Thomas Gipson had a great performance in just his second college game posting 19 points and 7 boards. The contest started at a sluggish pace for both squads with the Cats shooting just 2-12 from the field and 2-8 from the freethrow line early on. K-State led 28-32 at half and pulled away behind the scoring of Will Spradling who poured in 15 points in the second frame. Highlights, interviews with Coach Martin, and more in our game wrap up video from TheGamedayNetwork.com